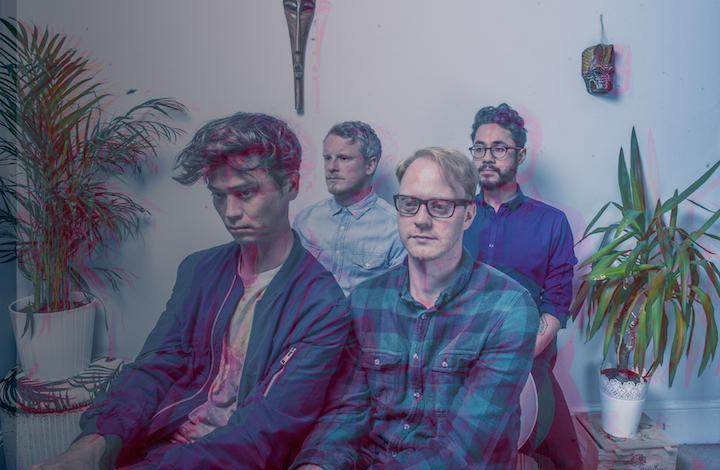 Delighted to announce details of how you can get your hands on the new album 'No Pleasure' from London's USA Nails.

A little under a year since the release of their first LP ‘Sonic Moist’ - the band are back with 'No Pleasure' - 11 furious tracks that expand the horizon of their thrilling noise-rock-kraut-punk landscape.

The record is available to pre-order on heavy-weight transparent green/orange 12" splatter vinyl and CD along with exclusive bundle deals from www.independentmusic.com.

"We are very happy with our new record. Hopefully, it provides a thoughtful contrast to our debut. We made a concious effort to encompass a broad range of ideas in the writing of it, though it is still brash and noisy and raw and there aren't any acoustic ballads about the Autumn on it. It was recorded live with Wayne Adams at Bear Bites Horse and to our minds, has captured the feel and energy of us in a live environment. Matt did the artwork, which should hopefully make you have a seizure. Our friend Bart Pettman took the photo on the inside, which should hopefully make you vomit."

The video was created by USA Nails' drummer (Matt Reid) who animated a series of GIF's, some of which tie in with the album artwork for No Pleasure. The GIF's were then projected onto a wall and the rest is just the product of four morons being awkward in front of a camera. It means absolutely nothing. Enjoy.

USA Nails put their stamp on the burgeoning London punk scene in early 2014 with a series of ferocious live shows and a slew of demo tracks. Their Album 'No... Read On »

It's called 'No Pleasure' but that's not an accurate description of USA Nails' latest album. For while the London band hark back to a hardcore scene that took in DC's Dischord... Read On »

Fancy drowning in corrosive noise? Take a bath in some USA Nails. Imagine is a pheumatic drill and a Marshall stack had a baby. That baby would still only be half... Read On »

Post-punk supergroup USA Nails are back with an even more brash, bothersome noise than before.Choosing raw energy and intensity over the more polished ruckus of their other bands (Oceansize, Future... Read On »

“The band name? Its literally named after a nail bar in Hackney”. Perhaps echoing the vein of PiL’s ‘This Is Not A Love Song’, USA Nails contend,“We are not a... Read On »

The day has come. Just under a year since the release of their first LP ‘Sonic Moist’, the band return with their latest instalment of brash noise-rock-punk-psych: 'No Pleasure'. The... Read On »

USA Nails put their stamp on the burgeoning London punk scene in early 2014 with a series of ferocious live shows and a slew of demo tracks. Their debut release ‘Sonic Moist’ followed... Read On »

Let's get it out of the way: USA Nails are a post-hardcore supergroup featuring members of the British underground scene's finest acts of the past decade, including Oceansize, Future Of... Read On »

Starting to feel a little burned out on the last Metz album? Still in need of something to replicate that special slamming head first into the concrete whilst downing bleach... Read On »

If you only buy one raucous, clattering homage to the Jesus Lizard the year, make it the excellent new Blacklister album, Adult.VIEW PRESS CLIPPING HERE  Read On »

USA Nails make the kind of raw, punishing racket you'd expect from collective broken off from Oceansize, Hawk Eyes, Kong, Future of the Left, Silent Front and Dead Arms. And... Read On »

Just under a year since the release of their first LP ‘Sonic Moist’, the band return with their latest instalment of brash noise-rock-punk-psych: 'No Pleasure'.Influenced by the likes of The... Read On »
Back to Magazine