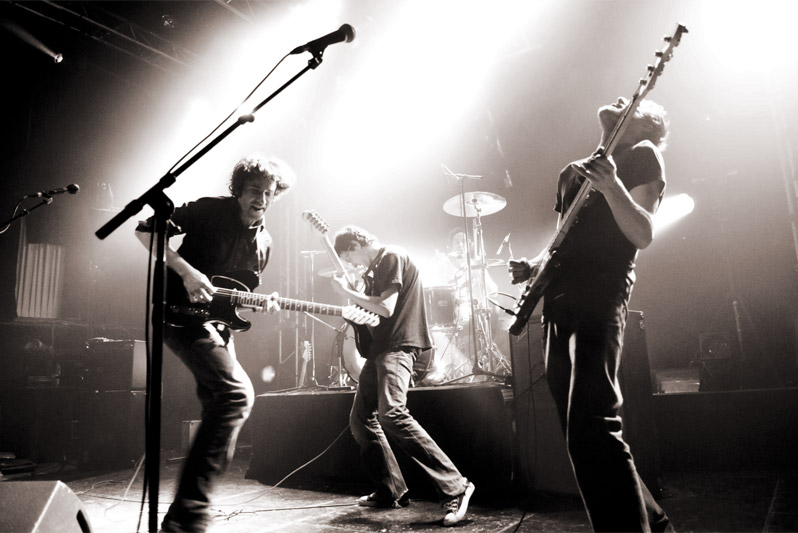 'Awards' may well still be standing at the end of the year doing star jumps when other contenders run out of steam.

A French trio from Brest, Mnemotechnic's debut plays out a series of dance-punk numbers that are steaming drunk on math-rock, throwing out guitar lines and walls of distortion as though summoning special powers from Golden Axe. The energy and intensity of 'Awards' is exhausting. Listening to this each day would remove the need for physical exercise.

So for a Mnemotechnic work out, certain constant components are needed. Each song needs heavy layers of guitar riffs doused with reverb and distortion. These are used to either create tension or a sense of (brief) tranquility. The second track on the album, "Blended Colors", in particular optimises muted yet noisy riffs to keep its verses taut and full of menace.

To provide maximum burn, elbow drop chords are also needed. "Dead End" again builds frantically, before reaching a bridge of filthy, disgusting chord thrashes that have the impact of prime Refused or ...And You Will Know Us By The Trail Of Dead. Underneath all the drama and power of these jarring chords is an unceasing disco high-hat, pushing the listener forward to dance harder, more, faster.

'Awards' isn’t one tone, though only one song provides a temporary shift in pacing - "Empty Page", their power ballad, with an emphasis on the 'power'. Instead of sprinting toward its chorus, the song takes a more measured approach. The music chimes and ebbs, an orchestral approach that shares the earnest arrangements of Godspeed You! Black Emperor. Over five minutes it reaches its final soaring altitude with a sense of doom-laden theatrics.

'Awards' demonstrates that Mnemotechnic are masters of impact. They create music and then refine it so that it boils down to its most concentrated form. This results in a disconcerting, highly affecting set of musical bursts that lock in riffs and distortion with similarly gnarled, high-register, vocals.

They leave little room for optimism. The pacing and rhythms are the only escape. There’s a real sense of dance-or-die, to point that when they sing “Kill The Birds/Kill The Trees/Kill The Grass/Kill The Bees” in "Red Cat Blackout" it inspires a huge, sadistic grin.

Mnemotechnic have a passion, possibly an obsession, with furor, destruction, energy and speed. It is lucky for everyone that they didn’t forge a career in politics. Instead they’ve picked up instruments and found a way to weld them into an hour of power with this debut album. 'Awards' may well still be standing at the end of the year doing star jumps when other contenders run out of steam. 'Awards' is a hydrogen bomb of an album.