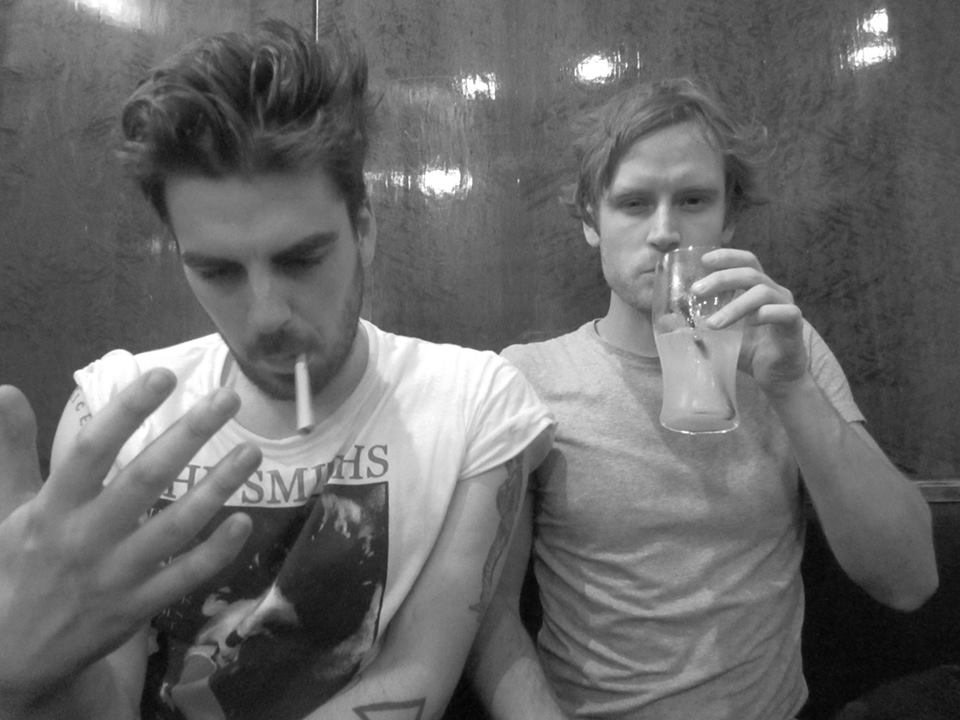 "Since nature abhors a vacuum, lack of sound depth, handicap usual duets rock, makes up for this extremely battery, and cause of hyper inventive guitar."

It starts with a sound hack, it ends with a sound tweaking. Between the two, the first album of Burning Alms give food for thought to those who are desperately waiting for a spark, a glimmer in the darkness of a rather gloomy current rock universe. This light is that of a candle lit in 1988 by four New Yorkers on the album Daydream Nation. Past the intro, we are directly immersed in a large bath of distortion and feedback so Sonic Youth heyday. The voice is back, lost in the deluge of double pedal and aggressive guitar furious incursions. The good old noise rock in stock, but with a real touch of modernity. A more dynamic, more chopped rhythmic guitars more incisive, so Blood Red Shoes? Besides, Burning Alms is also a duet, and it shows. No bass so it is fashionable. But Tom Whitfield and John Biggs are smarter than many of their contemporaries. Their music is much more fine and brighter than a vulgar pastiche grunge or a prog-rock revival.

Through a maze of melodies similar and monotonous appearance, the band takes us actually in exploring the boundaries of modern rock. Sonic experimentation and austere at first, but quickly proves eminently enjoyable. Since nature abhors a vacuum, lack of sound depth, handicap usual duets rock, makes up for this extremely battery, and cause of hyper inventive guitar. In terms of composition, the music of Burning Alms is a perpetual alternation of blitzkriegs sonic and long instrumental passages hovering. Couplets atonality assumed lead you right into a wall of sound, that of the chorus, the melodic brilliance stands out even more strongly in the manner of the greatest lo-fi groups.

Keep up the pros said on rock, the English always have an edge. So it is no coincidence that the album has Drenge paperboard (other things equal), announcing the arrival of a neo-grunge wave of the best kinds. 'In Sequence' on, we find the same melodic strength, even as instrumental in Loveless brothers insurance. And the same ability to hide in melodies rather pleasant real underlying tension. In fact, this album is a journey, a trek that will show you the sacred panoramas. Oscillation tireless, he will take you to the top of ridges difficult and noisy peaks -of noisy pieces of less than two minutes - you will calm by breathing in the highlands - de instrumental tracks including one of almost eight minutes. In all this relief, nothing is superfluous. Jerky rhythms, haunting guitar patterns sometimes recall period Radiohead Kid A / Amnesiac without this deliberately unlistenable side of an experiment hardliner. Here, we talk about pure body high. This is the essence of sound experimentation that gives your ears. Throughout this series of sound landfills and long contemplative moments, you never get bored. The instrumentals are particularly interesting, in that they do not want to demonstrate anything. Instead, the Burning Alms seek and discover at the same time as us, new horizons, new possibilities. The sincerity of their musical approach is total and extremely touching.

The few acoustic ballads on the album are beautiful, draped in a false simplicity that hides a harmonic complexity and a write honesty and rare interpretation. In short, In Sequence is the anxiety of grunge without heaviness. It's the inventiveness of Radiohead without pedantry. The more we advance in the disk, and the composition structure is revealed, never become routine. Harmonic couplets halftone interspersed with guitar rifts create a kind of monolithic always renewed dynamism. Even the acoustic tracks are revealed as many walks to the confines of the exercise of style.

Burning Alms are constantly experimenting, without sacrificing musicality on the altar of their quest. Their first record is impressive in its entirety. It is a comprehensive work which dips and bumps only make sense after a full listen. The sequence of titles, sound sequences present in the intro, outro and in throughout the album remind us, like a distant radio contact, we're on a mission in exploration. With intelligent basic framework on which they embroider infinitely without ever repeating, always finding the grip, the intelligence, nuance or arrangement which scotchent the auditor, the group proves that one can be demanding, inventive and downright listenable.