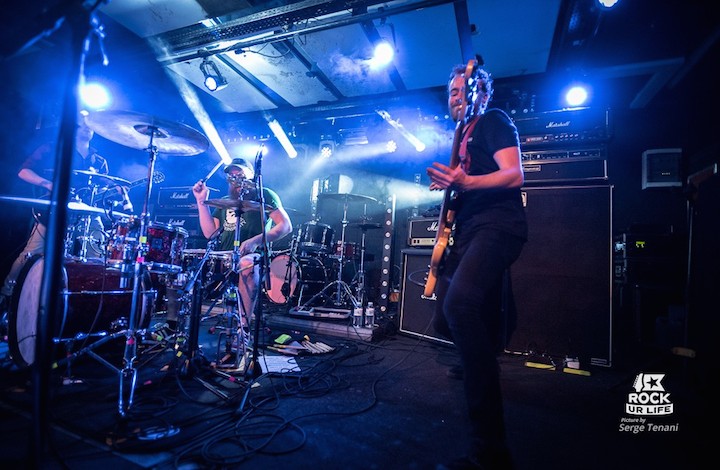 Happy headbangers with more up top..

The advantage of being one of only two punk bands in a Northern Irish coastal town is that, by forming a group together, you essentially remove all loval competition. At least, that's what happeed with riffy punk whizzes Axis Of. "Me and the bassist [and vocalist, Ewen Friers has a bit of a friendly rivalry,' explaines guitarist Niall Lawlor. "We were the driving forces of those two bands. They petered out and we thought, 'Why don't we start a band?' It was that, and a love of political punk like NOFX and Propagandhi, that was beyond our knowledge and years!"

Propagandhi's skilled frontman/guitarist Chris Hannad was a big influence on Niall's guitar development before the discovery of Torche led the group to zero in on their addictive 'heavy pop' sound. The year's 'The Mid Brae Inn' album is a prime example of their craft, mixing massive major-scale riffs and Weeze-style lead. Lond guitarist Niall says the secret to blending the two opposing sounds is down to two things: first, his amp setup (a Marshall JCM900 with an EQ pedal to tame it in verses and a clean Fender Blues Jr); and, second, drop-A tuning his Tele. "You get the best of both worlds," enthuses Niall. "You can play a really heavy riff, but also melodic open chords or intricate stuff. It's like we're a pop-rock abnd, but with one insanely heavy note!"